Board-certified anesthesiologists are physically present and will prescribe the optimal dose and frequency to achieve maximal benefit from treatment.

Our ability to co-administer propofol along with ketamine makes the patient’s experience more pleasant.

We maximize the use of continuous physiologic monitoring on all patients all the time.

We employ only highly trained RN’s with experience and training in conscious sedation and the use of ketamine.

We prescribe an individualized Wellness plan to maximize the likelihood of a positive response as well as improved function and quality of life on a long-term basis.

After consultation with an Anesthesiologist, most patients are scheduled to receive an initial series of 4-6 infusions over a 2 to 3 week period.

We evaluate patients after three infusions — if no benefit is being achieved, the treatments are usually discontinued (there are some exceptions). Patients with depression are monitored both by their subjective symptoms as well as objectively by using the QIDS (Quick Inventory of Depression Symptomatology) scale.

Ketamine infusions have been shown to be beneficial in approximately 75% of patients suffering from depression as well as chronic pain and opioid dependence. Ketamine is usually helpful in other conditions such as anxiety and PTSD. Patients with PTSD are followed objectively with a PTSD Checklist. Please see the medical literature research section below for detailed results.

Anesthesiologists have been safely using the anesthetic drug ketamine since its introduction in the U.S. in 1970. An anesthesiologist evaluates every treatment given, and he or she is immediately available whenever a patient is receiving care in our clinic. All patients receiving infusions are monitored by nurses in constant attendance, who utilize personal observation, pulse rate, blood pressure, ECG rhythm, respiratory rate, and pulse oximetry. Selected patients are also monitored by end-tidal carbon dioxide concentrations.

We are here to assist with their patients’ care, but their regular doctor maintains overall management. We communicate closely with our referring physicians as treatment progresses.

Ketamine is a unique medication, unlike any other, acting on specific areas of the brain and spinal cord.

However, in the past 10-20 years, there has been more focus on the role of glutamate, an excitatory amino acid/neurotransmitter, which is present in over 50% of the neural connections in the central nervous system.

Ketamine’s mechanism in treating depression, pain, PTSD, and other conditions are three-fold:

We are approved and qualified to administer the nasal form of ketamine if our referring physician requests that treatment. Once patients complete the initial dosing phase, Spravato maintenance requires a 2-hour clinic visit at least once a week, and sometimes twice every week. Please see the Spravato page for further information.

We provide two options to refer your patients.

Download the Physician Referral (PDF) then email, fax or give the completed referral to your patient to bring to us.

You can also refer your patient by completing the form.

Learn more on the efficacy of ketamine in treating a variety of pain and/or mental health conditions.

Find answers to your questions about Ketamine Infusion Therapy. 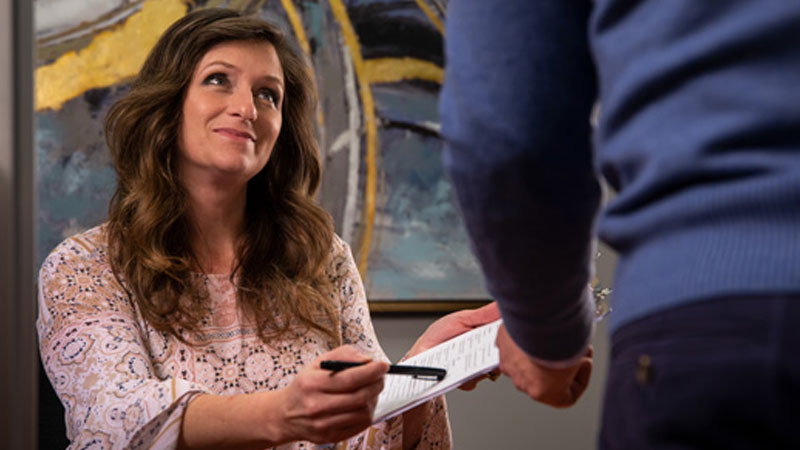 Follow these steps to get started with Ketamine Infusion Therapy.

We can work together to provide care for your patients.